The city of New York has been recording and releasing trip data for every single taxi ride in the city since 2009 (TLC Trip Data, NYC) and these publicly available datasets are treasure trove of information. Every single time a NYC taxi picks up a passenger, 19 different pieces of information are recorded, including gps coordinates of pickup and dropoff, total fare and distance traveled. Think about how many cabs you see while walking the streets of New York and then imagine how many times in a day just one of those cabs picks up a passenger… yeah, that’s a lot of data. A single data file from  TLC Trip Data, NYC contains data for one month between 2009-2016 and weighs in at a  MASSIVE 2 GB.

There have already been plenty of cool visualizations and analyses of this data set, Todd  W. Schneider processed the ENTIRE data set from 2009-2015, amounting to over a billion taxi trips (link) and found lots of interesting trends. His comparison of yellow and green taxis to Uber rides in individual boroughs (link) is particularly interesting. Chris Wong created a visualization that follows a randomly selected cab through a day of driving (link) and Juan Francisco mapped over 10,000 cabs in a 24 hour period to create a mesmerizing video (link). Both used the start and end points from the TLC Trip data and created a best guess route via the Google Maps API. It’s pretty fun to watch the taxis jump around the city, especially if you happen to have just read Rawi Hage’s novel Carnival, in which the main character, a cab driver, describes one type of cabbie as “the flies”, opportunistic wanderers floating the streets waiting for passengers and getting stuck in their own web of routine.

In my own exploration of the data, I’ve been following two main threads. The first, which I’ll describe today, is map-making using gps coordinates of the taxis. The second, which I’ll leave to a future post, involves a more statistical analysis of the data focused on understanding average taxi speed. I’ll start by describing the final product, then dig into the details of my coding approach (python source code is available on my github page here).

This map was made by creating a rectangular grid spanning New York City and counting how many pickups occurred within each grid bin (more details on this below) within three months. The color scale is the base-10 log of the number of pickups in each bin (yellow/white are a lot of pickups, red are a lower number and black are no pickups). The horizontal direction (longitudinal) is divided into 600 bins, while the vertical (latitudinal) is divided into 800 bins, a grid fine enough to resolve individual streets.

The level of detail visible in this map is impressive. My eye was initially drawn to the odd half-circle patterns in the East Village, which it turns out is Stuyvesant Village. It’s also odd that the bridges to Brooklyn and Queens show up at all. I’m pretty sure it’s impossible for cabs to pick up anyone on one of these bridges. Perhaps the presence of the bridges arises from uncertainty in the GPS coordinates or cabbies starting their trip meter after getting on the bridge? Hard to say. But it’s kinda neat! The other very clear observation is the drop in cab pickups in Manhattan around the north end of Central Park. The NYC Taxi and Limo Commission observed this same feature and calculated that 95% of pickups in Manhattan occurred south of this boundary, which led to the creation of the green Boro taxis in order to provide more equitable access to taxis (more info here and here).

In addition to simply mapping taxi pickup location, some interesting trends are visible by changing the color scale to reflect different variables. The following map takes the same pickup locations, but colors each grid point by the average distance traveled away from the pickup location: 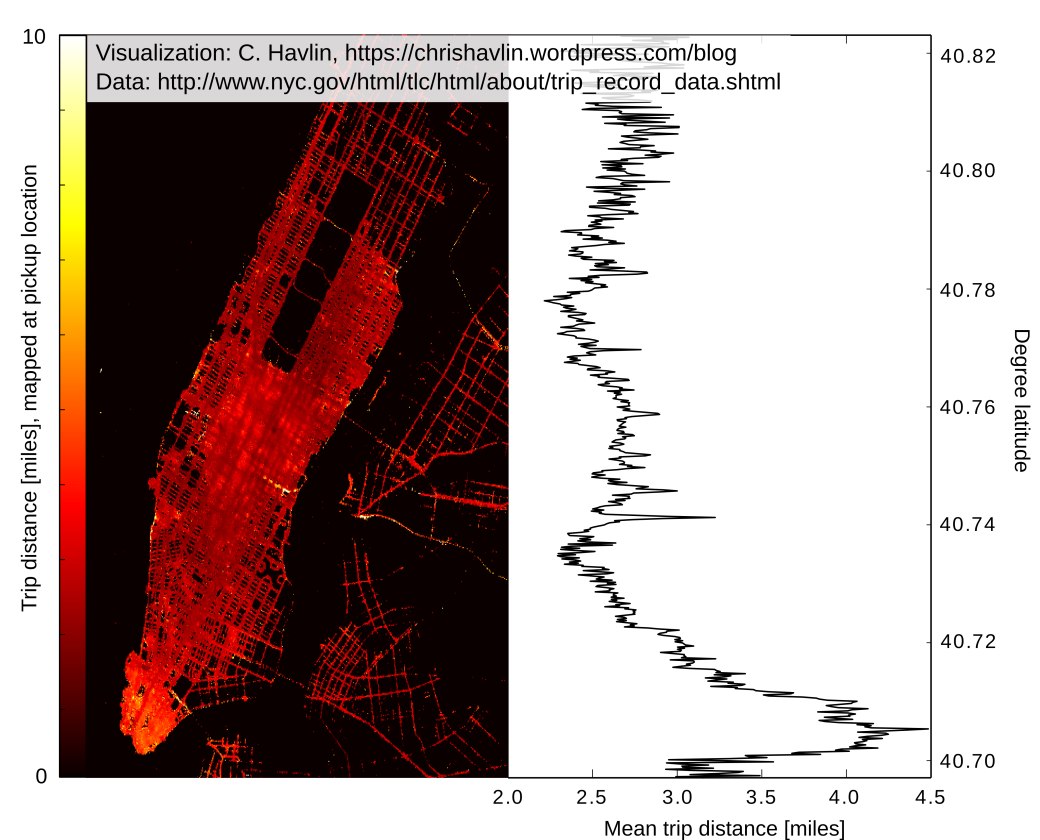 The map is fairly uniform in color, except for around Wall Street and the southern tip of Manhattan, where the more yellow coloration shows a generally higher trip distance. It’s hard to pick off numbers from the color scale, so I took the map and created a modified zonal average; at each latitude, I averaged across the longitudinal grid points, only using grid points with non-zero values, and then plotted the result (above, right). The line plot shows pretty clearly that cabs picking up passengers around Wall Street tend to go about 2 miles farther than trips originating anywhere else. Why is this? Hard to say without a lot more analysis, but 4 to 4.5 miles happens to be about the distance up to Penn Station or Grand Central Station, so I suspect commuters who don’t mind spending extra money to avoid the subway on their way to the train.

In the following I’ll dive into the horrid detail of how I made the above maps, read on if you dare! Future posts will look into some more complicated analysis of the yellow cab data, beyond simple visualization, so stay tuned for that…

The datafiles at TLC Trip Data, NYC are HUGE comma separated value (csv) plain text files, each weighing in at about 2 GB. A single file covers all entries for a single month and contains 19 entries per line. A single line in the csv file looks like:

The TLC yellow cab data dictionary, describes what each entry is, but the ones I find most interesting are: pickup time (entry 2), dropoff time (entry 3), passenger count (entry 4), trip distance (entry 5), pickup and drop off longitude and latitude coordinates (entries 5, 6, 9 and 10, respectively), total fare (entry 12) and tip (entry 15).  So in most basic terms, all I’ve done is read each line of the file, pull out the entry of interest along with its gps coordinates and then find a way to plot that aggregated data.

The source code (available here) is divided into two python modules: taxi_main.py and taxi_plotmod.py. The first deals with reading in the raw .csv files while the second contains routines for processing and plotting that data. The source includes several a README and several scripts that show examples of using modules, so I won’t go into that here. Rather, I’ll describe my general approach along with several problems I ran into (and their solutions).

Reading in a single csv data file is relatively straightforward. The standard open command (open(filename, ‘r’)) allows you to read in one line at a time. The functions  of interest are in taxi_main.py: read_taxi_file loops over all of the csv files in a specified directory and for each file calls read_all_variables. I did add some fancy indexing in the form of a list of strings that identify which of the 19 variables you want to save (see the Vars_To_Import variable) so that you don’t have to import all the data. Check out the main function in taxi_main.py to see an example of using the commands to read in files.

One  of the design decisions I made early on was to read in the data then store it in memory before processing it. Meaning there is a big array (Vars or VarBig in taxi_main.py) that stores all of the imported data before feeding it to the routines for spatially binning the data (see below). This seriously limits the scalability of the present code:  for the 3 months of data used in the above maps, I was using up 30-45% of my laptop’s memory while reading and processing the data. Including more months of data would use up the remaining RAM pretty quick. The way around this problem would be to write some routines to do that spatial binning or other processing on the fly, so that the whole data set wouldn’t need to be stored. The advantage of holding the data set in memory, however, is that I can easily process and re-process that data multiple times without the bottle neck of reading in the files. So I stuck with the present design rather than rewriting everything…

To create spatial maps and images, I had to go from point data to a gridded data product. This is a common practice in geo-located data sets (data sets that have latitude, longitude and some associated measurement at those coordinates) and though there are many complicated ways to carry out this process, the concept is simple:

Each data point has a latitude, longitude and associated measurement (the color of the dots in the case of the conceptual image above) and the data points are spatially scattered according to their coordinates. To make a gridded data product, I first specified a latitude/longitude grid (dashed lines, left). I then find which points lie within each bin, aggregate the measurements within a bin and then store that new single value in the bin. In this conceptual case, I’ve averaged the color of the data points to define the new gridded data product. In the NYC taxi maps shown above, the color is first determined by simply the total number of measurements within a bin and then the average of all the trip distance measurements within a bin.

Since the reading of the raw data file and subsequent spatial binning can take a few minutes, the code can write out the gridded data products (see the main function in taxi_main.py). These files are only a few MB in size, depending on the resolution of the grid, so it’s much easier to repeatedly load the gridded data products rather than re-processing the dataset when fine tuning the plotting.

pyTip: where. One of the useful python tricks I learned in this is the numpy routine where that identifies the indeces of an array that meet a specified criteria. Say you have a giant array X with values between 0 and 100. If you want to find the mean of X, but only using values less than 50, you could use np.mean(X[np.where(X<50)]).

pyTip: looping efficiency. Less of a python tip and more of a computational tip, but there are several ways to write a routine that spatially bins point data. The first approach that I stupidly employed was to loop over each bin in the spatial grid, find the points that fall within those bins and then aggregate them. If N is the total number of data points, Nx is the number of bins in the x dimension and Ny is the number of bins in the y dimension, then in psuedo-code, this looks like

A much better way to do it is to loop over N, find the corresponding bin and aggregate the measurements within that bin (again, this is psuedo-code, check out the real source code, map_proc within taxi_plotmod.py to see the working python code):

A simple switch, but it scales to large values of N, Nx and Ny much better. The above maps took only a few minutes to process using the second (good) approach, while when I initially tried using the first (stupid) approach, the code was still running when I killed it after 30 minutes.

Plotting the spatially binned data: The plotting makes use of the matplotlib module, specifically the pcolormesh function. I went through a lot of color maps and ended up settling on ‘hot.’ Gives the maps an almost electric feel.  Not much else to say about the plotting, pretty standard stuff. Check out plt_map within taxi_plotmod.py if you want the detail.

Stay tuned for more exploration of the NYC taxi data!